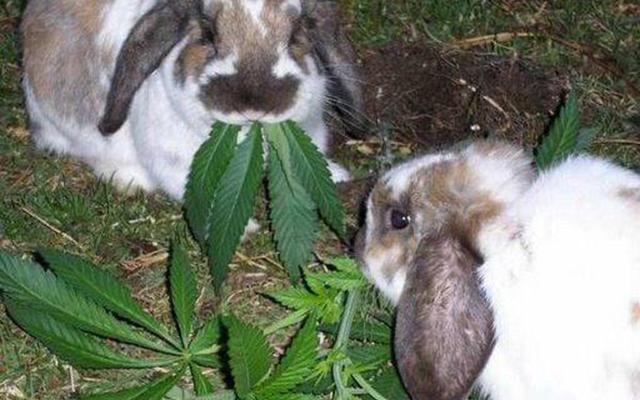 Utah is considering a bill that would allow patients with certain debilitating conditions to be treated with edible forms of marijuana. If the bill passes, the state's wildlife may "cultivate a taste" for the plant, lose their fear of humans, and basically be high all the time. That's according to testimony presented to a Utah Senate panel (time stamp 58:00) last week by an agent of the Drug Enforcement Administration.

"I deal in facts. I deal in science," said special agent Matt Fairbanks, who's been working in the state for a decade. He is member of the "marijuana eradication" team in Utah. Some of his colleagues in Georgia recently achieved notoriety by raiding a retiree's garden and seizing a number of okra plants.

Fairbanks spoke of his time eliminating back-country marijuana grows in the Utah mountains, specifically the environmental costs associated with large-scale weed cultivation on public land: "Personally, I have seen entire mountainsides subjected to pesticides, harmful chemicals, deforestation and erosion," he said. "The ramifications to the flora, the animal life, the contaminated water, are still unknown."

Fairbanks said that at some illegal marijuana grow sites he saw "rabbits that had cultivated a taste for the marijuana. ..." He continued: "One of them refused to leave us, and we took all the marijuana around him, but his natural instincts to run were somehow gone."

It's true that illegal pot farming can have harmful environmental consequences. Of course, nothing about these consequences is unique to marijuana. If corn were outlawed and cartels started growing it in national forests, the per-plant environmental toll would be about the same.

But backcountry marijuana grows are a direct result of marijuana's illegal status. If you're concerned about the environmental impact of these grows, an alternative is to legalize and regulate the plant so that people can grow it on farms and in their gardens, rather than on remote mountainsides.

Now, regarding rabbits. Some wild animals apparently do develop a taste for bud (and, yes, best to keep it away from your pets). But I don't know that the occasional high rabbit constitutes grounds for keeping marijuana prohibition in place, any more than drunk squirrels are an argument for outlawing alcohol. And let's not even get started on the nationwide epidemic of catnip abuse.

There was a time, not too long ago, when drug warriors terrified a nation with images of "the devil's weed" and "reefer madness." Now, it seems that enforcers of marijuana law conjuring up a stoned bunny?

Not scary enough for the Utah Senate, it seems: the panel approved the bill and sent it to the full Senate, where it will be debated this week.