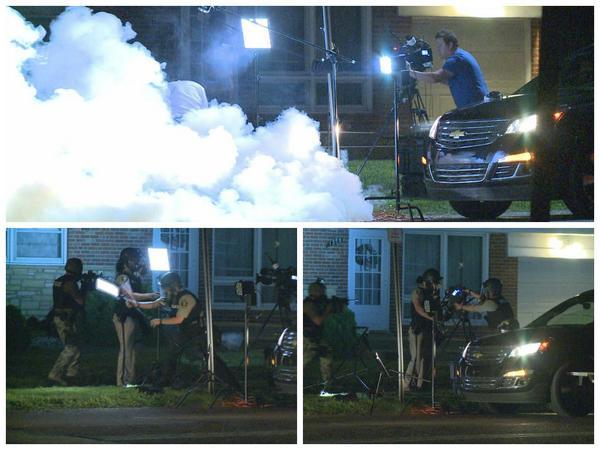 Two reporters working out of a McDonalds in Ferguson, Mo. say they were arrested and assaulted for no apparent reason while covering the increasingly violent clash between police and protestors on Wednesday night. Both were eventually released without being charged. According to reports, Washington Post reporter Wesley Lowery and Huffington Post reporter Ryan J. Reilly were both arrested, handcuffed and booked. Once word of their arrests began circulating on social media, they were immediately released.

Lowery and Reilly were both apparently working from a Ferguson McDonalds when a SWAT team entered the restaurant. After posting initial tweets about the encounter, both reporters went offline just before 5 pm.  Around the same time, other reporters in the area began to tweet that two reporters were being arrested and handcuffed.  At that point, LA Times reporter Matt Pearce began investigating the arrests.  Pearce wrote on Twitter that the Ferguson police chief told him the arresting officers were "probably somebody who didn't know better." According to Pearce, the chief then instructed riot command to release them. About 45 minutes after Lowery and Reilly's last tweets, they came back online.

Lowery, who says he was slammed into a fountain soda machine during his arrest, wrote on Twitter that he was "Detained, booked, given answers to no questions. Then just let out... Got no explaination at any point why in custody other than "trespassing" - at a mcdonalds where we were customers."  According to Lowery, police entered the McDonalds on Wednesday afternoon and demanded he and Pearce identify themselves. When Pearce questioned the directive, one officer apparently told him that if they called 911, no one would answer.  The officers later told Lowery and Pearce that they'd have to stop filming and leave the McDonalds.  Lowery says he was given conflicting instructions and when he stopped to adjust his bag, they arrested him.

The reporters were then transported to a local police station, processed, and jailed. When they asked for the cause of their arrest, a cop reportedly told them they were trespassing in the McDonalds.

On top of the McDonalds incident, another film crew was hit with tear gas, and S.W.A.T. team members broke down their camera equipment for them when they tried to escape the gas.